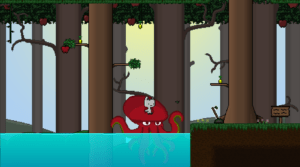 I didn't know that I needed a game that allowed me to ride an octopus, throw apples at the bad guys, and glide around as a cute little imp... but then Applewood came along and showed me that, in fact, I DO need exactly that type of game.

I was lucky enough to get a free review key for Applewood, and it is easily one of the most adorable games I have played in a long time. You play as Ringo, a cute little imp that indeed throws apples to defeat bad guys, has a friend that's an octopus, and of course you do actually glide around. Getting around by jumping from platform to platform and bouncing off walls is that much more interesting when you fly, but only kind of fly.

Applewood is a platform/puzzle game that is nicely forgiving when you die. It maintains some of your puzzle unlocks, and provides fast travel between a few save points around the world that includes a forest, mine, and mountain. The puzzles aren't overly challenging, but make great use of the items and environment around you. Don't be fooled into thinking they're easy though. I definitely got myself caught up a few times, which is how I figured out what happens when you ultimately use up all your cute little hearts and die. It also ends up taking a bit of a darker turn (no spoilers!).

For my personal casual play style, the lack of instant or permanent death is much appreciated. Plus, there's no worrying about weapon upgrades or abilities, which is honestly a bit of a relief. As for the story line, it is surprisingly dense and, along with the apple puns, it's as sweet as pie (you're welcome). There are also fun collectibles throughout the world. The supporting cast of characters that includes some evil foes, the aforementioned octopus, a slightly grumpy alpaca, a goat storekeeper, a frog that doesn't say much, the obviously intelligent owl, a worm that travels via balloon somehow, and a stressed out fox.

It's wonderfully entertaining and engaging, and I highly recommend it. It's a charming, relaxing bit of fun, and plays through in about a half dozen hours, give or take.

I'm going to go out on a limb (lols) and give Applewood a tasty 5 apples out of 5. Developed solo by indie developer Garrett Thompson, it is currently available in Steam. Take a listen to some of the game's music below, along with a trailer for the game to whet your appetite, then do yourself a favour and pick this game up. In the mean time I'll be patiently waiting for some cute Applewood merch. Maybe a Ringo plush? Apple pins? Just sayin'.

Sphinxy is a Mixer streamer at mixer.com/sphinxy. She plays a variety of games leaning towards casual, fun and RPG gaming, the likes of Minecraft, Stardew Valley, Assassin’s Creed: Odyssey, Final Fantasy, Lego games, sims and city builders, and indie games. Opinions are her own and do not necessarily reflect those of Tri-North Studios.

Thinking about streaming? Don’t miss Episode 2 of M³ Tech Talk where MepTech, Mossiprose, MysticMike, and Sphinxy guide you through the basics that you’ll need to go live for the first time. […]

In Episode 7 of M3 Tech Talk we discuss our thoughts on the news we know about the PS5 v. Xbox Series X. […]

Welcome to M³ Tech Talk! In this new podcast from Tri-North Studios we’ll deep dive into the details about the hardware behind our broadcasts and streams–from cameras, to PCs, to audio, to the software and hardware that runs everything we do. […] 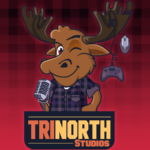